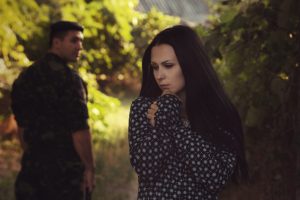 If your spouse is threatening you with serious bodily harm or harassing or abusing you or your child, then you should seek protection right away. This article begins a series of articles designed to provide information to spouses, ex-spouses, children and other intimates of military members who are being abused. Also, if someone is seeking a Protective Order against you then you need an experienced attorney to represent your interests.  There are civilian Protective Orders (issued by the state court) and Military Protective Orders (“MPO”) (issued by a Commanding Officer).

What Is An MPO?

An MPO (Military Protective Order) may be issued to protect the spouse, child, significant other or ex-spouse or any person threatened by a military service member.  The service member may be ordered by his Commanding Officer (or the Base Commander) to remain away from home and stay away from the alleged victim.  Typically, the service member will also be required to attend counseling with the Family Advocacy Program representative on base.  If the service member violates the MPO, he or she is subject to discipline under Article 92 of the UCMJ (violation of a lawful order).

Are there different types of DV Protective Orders?

There are generally two types of civilian protective orders. A Temporary Protective Order (a “TPO”) is an immediate order to stay away from another person (including that person’s home or work) which lasts from one week to one month. A TPO may be issued just on the testimony of the alleged victim (called the “Petitioner”) without any additional proof.  The TPO is meant to provide temporary protection until the court can hold a hearing and review the evidence.

Usually, the court will order a Protective Order hearing one week after the TPO is issued.  The person accused of abuse (called “the Respondent”) is entitled to refute the accusations, present evidence and have an attorney present.  The court must determine whether a preponderance of evidence (51%) shows that the Petitioner (or Petitioner’s child) was abused.  The court may not grant a Protective Order based on past acts of violence but those past acts of violence may be relevant to show that recent abuse.

Usually, a final Protective Order prohibits the Respondent from contacting, harassing, stalking or threatening the Petitioner by phone, email or social media.  However, the court may allow contact for the limited purpose of visitation with a child that the parties have in common. The final Protective Order can be extended for six months to two years (depending on the circumstances) if there is a reason for the extension.

If abuse is alleged against someone who is not a family member or does not live with or have a child with the Petitioner (like a neighbor), a Peace Order serves the same purpose.  A temporary Peace Order is issued upon an allegation of abuse (or threats of abuse) and lasts until the court can hold a contested hearing on the matter.  If the court determines that there was abuse (or the Respondent consents to the entry of the order), the Court will enter a Peace Order requiring the Respondent to stay away from the Petitioner.  Peace Orders usually last for six months.

Getting a Military Protective Order

A Military Protective Order is an order issued by a person with authority over the service member or over the installation where the parties live.  Typically, a base commander or the service member’s commanding officer will issue an MPO where there is a complaint of abuse.  The terms of an MPO are not limited by statute and may vary depending on the circumstances.  Usually, the MPO will order the service member to move out of base housing and refrain from contacting the alleged victim for a specific period of time.

Like a civilian Protective Order, an MPO may allow for contact with the alleged victim to facilitate visitation with children. Unlike a civilian Protective Order, an MPO does not have a specific time limit and the service member is not entitled to a hearing before the base commander or the commanding officer who issued the order.  The service member may petition the issuing authority to modify or rescind the MPO, however, this is usually done through legal counsel.

If you are experiencing verbal threats or physical abuse (of any kind) from someone close to you in the military, you are not alone.  An experienced attorney can help you obtain a civilian or Military Protective Order (or a Peace Order) to get you and your children the protection you need.  Conversely, if someone has filed for a civilian or Military Protective Order against you it is imperative that you obtain experienced legal representation.  Contact Attorney Larry Burch by email at lburch@mcmillanmetro.com to find out more about how you can get help through the military or the family courts in Maryland and the District of Columbia.